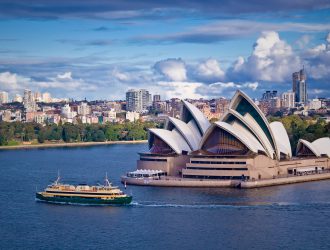 During his meeting with Australian Minister for Foreign Affairs Julie Bishop in Canberra on Thursday, Minister Dr Mahat made the request arguing that Nepali students and others are facing unnecessary hassles as Australian visas are currently issued from the Australian mission in New Delhi.

According to census conducted in 2011, the number of Nepalese immigrants in Australia had reached to over 24,636. Over 12,000 Nepali students on an average are said to travel to Australia every year.

According to a press statement issued by the Nepali embassy in Canberra on Thursday, Minister Mahat also held discussion on increasing development assistance to Nepal, resuming assistance that was cut earlier, increasing Australian investment in Nepal's energy, infrastructure and other potential areas with Minister Bishop.

According to the press statement, Australian Minister Bishop expressed willingness of Australia to enhance investment in the energy sector in Nepal. “Both the ministers exchanged their views in enhancing the level of interaction through exchange of bilateral visits,” it read.

This is to certify that President Travel & Tours (P) Ltd., Durbarmarg, Kathmandu has been providing ticketing services to the Asian Development Bank (ADB), Nepal Resident Mission (NRM) since 15th May 2006, for travel requirements of the resident mission staff, Government study tour/workshop particip… END_OF_DOCUMENT_TOKEN_TO_BE_REPLACED

This is to certify that president travel and Tours (P) Ltd., Durbar Marg, Kathmandu has been providing ticketing services to the Asian Development Bank (ADB), Nepal Resident Mission (NRM) since 15 may 2006, for travel requirements of the international as well as the domestic sectors. Over the years,… END_OF_DOCUMENT_TOKEN_TO_BE_REPLACED

This is to certify that president travel and Tours (P) Ltd., Durbar Marg, Kathmandu has been providing ticketing services both domestic and international to WWF Nepal since 2004. WWF Nepal has very frequent travel and ticketing requirements and we have been getting efficient and timely services from… END_OF_DOCUMENT_TOKEN_TO_BE_REPLACED

Ever since Qatar Airways has started working with President Travel a couple of years ago, we have had a very successful partnership. President Travel understands and very well to communicate Qatar Airways products to their customers across Nepal market. They are one of our direct local contact for o… END_OF_DOCUMENT_TOKEN_TO_BE_REPLACED

GIZ Office Kathmandu, on the behalf of its projects and Programme, would like to thank you and your whole team for rendering excellent travel services during the contract period i.e. 2010-2013. We acknowledge your quality support in international air ticketing, hotel booking and visa processing. Hen… END_OF_DOCUMENT_TOKEN_TO_BE_REPLACED