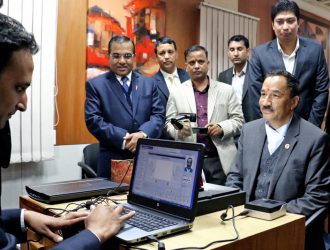 The Ministry of Foreign Affairs (MoFA) has launched online live enrollment system to collect forms to acquire Machine Readable Passports (MRP) from the applicants in Kathmandu and Nepali migrant workers in various countries.

The system was inaugurated by Deputy Prime Minister and Foreign Minister Kamal Thapa at the ministry on Monday by producing a passport for Thapa himself amidst the same inauguration function.

Officials from the Department of Passport took picture of Thapa, filled up the online form based on the live enrollment system and issued him a new diplomatic passport within 10 minutes in Thapa's presence.

With the introduction of the new system, the waiting time for MPR applicants has decreased significantly, said officials.

"Live enrollment system will be used in 10 missions abroad starting December first week," DPM Thapa announced on the occasion. "With this new technology in place, the MRP distribution system will be significantly easier and faster for the general public."

Officials said the department will receive forms through both live enrollment and manual system for the next one month and a half and will start accepting all applications through online system from mid-January.

"From now onward, MRP applicants will not have to queue up for a long time. We plan to issue MRP within hours of receipt of application," said Lok Bahadur Thapa, direction general of the Department of Passport, said.

The new system, as shown during the function, confirms the approval or rejection of application within five minutes.

Describing introduction of the new system as a milestone in the history of passport distribution in Nepal, Thapa said that it will help the government to phase out the remaining hand-written passports soon.

Thapa said the government has taken some immediate measures to avoid hassles for those who have failed to replace their passports with MRPs.

This is to certify that president travel and Tours (P) Ltd., Durbar Marg, Kathmandu has been providing ticketing services to the Asian Development Bank (ADB), Nepal Resident Mission (NRM) since 15 may 2006, for travel requirements of the international as well as the domestic sectors. Over the years,… END_OF_DOCUMENT_TOKEN_TO_BE_REPLACED

This is to certify that President Travel and Tours (P) Ltd, Durbarmarg, Kathmandu Nepal has been providing ticketing service for both International and Domestic sector for International Center for Integrated Mountain Development ( ICIMOD ) since last year with one expert ticketing staff in ICIMOD pr… END_OF_DOCUMENT_TOKEN_TO_BE_REPLACED

This is to certify that President Travel & Tours (P) Ltd., Durbarmarg, Kathmandu has been providing ticketing services to the Asian Development Bank (ADB), Nepal Resident Mission (NRM) since 15th May 2006, for travel requirements of the resident mission staff, Government study tour/workshop particip… END_OF_DOCUMENT_TOKEN_TO_BE_REPLACED